A few years ago I picked up Assata's book and everything I was reading sounded like present-day life. This book shared insite on what happened to our people while behind jail. Could a book published in 1987 speak on things happening today? Yes and here's proof... 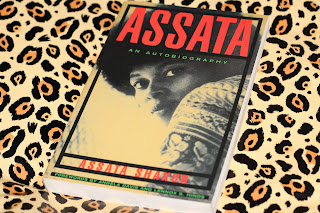 “In prisons, it is not at all uncommon to find a prisoner hanged or burned to death in his cell. No matter how suspicious the circumstances, these deaths are always ruled ‘suicides.’ They are usually Black inmates, considered to be a ‘threat to the orderly running of the prison.’ They are usually among the most politically aware and socially conscious inmates in the prison.” — Assata Shakur" 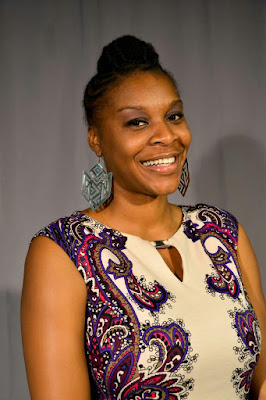 If this quote does not make you think of the beautiful Sandra Bland, then you have been living under a rock. Ms. Bland, a 28-year-old African-American from the Chicago area, was taken into custody in southeast Texas following the confrontational 2015 traffic stop and was found hanging in a jail cell three days later.

If you still are not sold on the relevance on this book just read this...

"Black brothers, Black sisters, i want you to know that i love you and i hope that somewhere in your hearts you have love for me. My name is Assata Shakur (slave name joanne chesimard), and i am a revolutionary. A Black revolutionary. By that i mean that i have declared war on all forces that have raped our women, castrated our men, and kept our babies empty-bellied.

I have declared war on the rich who prosper on our poverty, the politicians who lie to us with smiling faces, and all the mindless, heart-less robots who protect them and their property.

I am a Black revolutionary woman, and because of this i have been charged with and accused of every alleged crime in which a woman was believed to have participated. The alleged crimes in which only men were supposedly involved, i have been accused of planning. They have plastered pictures alleged to be me in post offices, airports, hotels, police cars, subways, banks, television, and newspapers. They have offered over fifty thousand dollars in rewards for my capture and they have issued orders to shoot on sight and shoot to kill.

I am a Black revolutionary, and, by definition, that makes me a part of the Black Liberation Army. The pigs have used their newspapers and TVs to paint the Black Liberation Army as vicious, brutal, mad-dog criminals. They have called us gangsters and gun molls and have compared us to such characters as john dillinger and ma barker. It should be clear, it must be clear to anyone who can think, see, or hear, that we are the victims. The victims and not the criminals.

It should also be clear to us by now who the real criminals are. Nixon and his crime partners have murdered hundreds of Third World brothers and sisters in Vietnam, Cambodia, Mozambique, Angola, and South Africa. As was proved by Watergate, the top law enforcement officials in this country are a lying bunch of criminals. The president, two attorney generals, the head of the fbi, the head of the cia, and half the white house staff have been implicated in the Watergate crimes.

They call us murderers, but we did not murder Martin Luther King, Jr., Emmett Till, Medgar Evers, Malcolm X, George Jackson, Nat Turner, James Chaney, and countless others. We did not murder, by shooting in the back, sixteen-year-old Rita Lloyd, eleven-year-old Rickie Bodden, or ten-year-old Clifford Glover. They call us murderers, but we do not control or enforce a system of racism and oppression that systematically murders Black and Third World people. Although Black people supposedly comprise about fifteen percent of the total amerikkkan population, at least sixty percent of murder victims are Black. For every pig that is killed in the so-called line of duty, there are at least fifty Black people murdered by the police.

Black life expectancy is much lower than white and they do their best to kill us before we are even born. We are burned alive in fire-trap tenements. Our brothers and sisters OD daily from heroin and methadone. Our babies die from lead poisoning. Millions of Black people have died as a result of indecent medical care. This is murder. But they have got the gall to call us murderers.

They call us kidnappers, yet Brother Clark Squires (who is accused, along with me, of murdering a new jersey state trooper) was kidnapped on April z, 1969, from our Black community and held on one million dollars' ransom in the New York Panther 21 conspiracy case. He was acquitted on May 13, 1971, along with all the others, of 156 counts of conspiracy by a jury that took less than two hours to deliberate. Brother Squires was innocent. Yet he was kidnapped from his community and family. Over two years of his life was stolen, but they call us kidnappers. We did not kidnap the thousands of Brothers and Sisters held captive in amerika's concentration camps. Ninety percent of the prison population in this country are Black and Third World people who can afford neither bail nor lawyers.

They call us thieves and bandits. They say we steal. But it was not we who stole millions of Black people from the continent of Africa. We were robbed of our language, of our Gods, of our culture, of our human dignity, of our labor, and of our lives. They call us thieves, yet it is not we who rip off billions of dollars every year through tax evasions, illegal price fixing, embezzlement, consumer fraud, bribes, kickbacks, and swindles. They call us bandits, yet every time most Black people pick up our paychecks we are being robbed. Every time we walk into a store in our neighborhood we are being held up. And every time we pay our rent the landlord sticks a gun into our ribs.

They call us thieves, but we did not rob and murder millions of Indians by ripping off their homeland, then call ourselves pioneers. They call us bandits, but it is not we who are robbing Africa, Asia, and Latin America of their natural resources and freedom while the people who live there are sick and starving. The rulers of this country and their flunkies have committed some of the most brutal, vicious crimes in history. They are the bandits. They are the murderers. And they should be treated as such. These maniacs are not fit to judge me, Clark, or any other Black person on trial in amerika. Black people should and, inevitably, must determine our destinies.

Every revolution in history has been accomplished by actions, al-though words are necessary. We must create shields that protect us and spears that penetrate our enemies. Black people must learn how to struggle by struggling. We must learn by our mistakes.

I want to apologize to you, my Black brothers and sisters, for being on the new jersey turnpike. I should have known better. The turnpike is a checkpoint where Black people are stopped, searched, harassed, and assaulted. Revolutionaries must never be in too much of a hurry or make careless decisions. He who runs when the sun is sleeping will stumble many times.

Every time a Black Freedom Fighter is murdered or captured, the pigs try to create the impression that they have quashed the movement, destroyed our forces, and put down the Black Revolution. The pigs also try to give the impression that five or ten guerrillas are responsible for every revolutionary action carried out in amerika. That is nonsense. That is absurd. Black revolutionaries do not drop from the moon. We are created by our conditions. Shaped by our oppression. We are being manufactured in droves in the ghetto streets, places like attica, san quentin, bedford hills, leavenworth, and sing sing. They are turning out thousands of us. Many jobless Black veterans and welfare mothers are joining our ranks. Brothers and sisters from all walks of life, who are tired of suffering passively, make up the BLA.

There is, and always will be, until every Black man, woman, and child is free, a Black Liberation Army. The main function of the Black Liberation Army at this time is to create good examples, to struggle for Black freedom, and to prepare for the future. We must defend ourselves and let no one disrespect us. We must gain our liberation by any means necessary. It is our duty to fight for our freedom. It is our duty to win. We must love each other and support each other. We have nothing to lose but our chains." 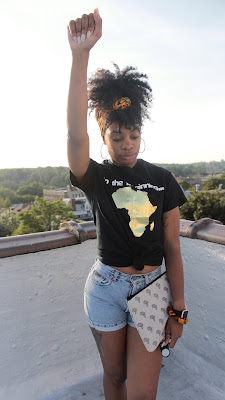 "We are living in a time where our backs are constantly being pushed against the wall all because we are asking for equality. For so long things has been swept under the rug but thanks to modern technology, social media, and the enlightenment of our people, we are standing together to improve the future. I stand here with my fist held high and an aura that demands respect to tell my brothers and sisters/fellow kings and queens that it is time we UNITE against injustice."

Continue shopping
Regradless of the delivery method chosen  at check out, the production time remains the same unless a rush my order fee was applied.

Most items are made by hand and often made to order, please allow 5 to 7 days for your order to ship. Should you need an item shipped sooner, feel free to email: info@themotherlandplug.com to see if it is possible to have your order expedited before you place your order. There is a ﻿RUSH MY ORDER FEE.﻿

Curbside Pickup is generally available on Weekdays, 10 am to 1 pm. Once your order is received we will contact you to set up a pickup time.

We highly recommend being available to receive your package. Deliveries generally take place daily between the hours of 10 am to 6 pm. We will text/call you once your order is ready and schedule a delivery time.

Orders are shipped to the shipping address provided at checkout.An email containing your tracking number will be sent once your order has shipped. Allow up to 48 hours for tracking information to become active in the carrier's system.

We are not responsible for packages lost in transit and cannot guarantee how long it will take for delivery. Our goal is to offer you the best shipping options, no matter where you live. On occasion items in the same purchase may be sent in separate packages.

Once your order is shipped, it can take anywhere from 2 to 14  days for you to receive it.

We do not offer refunds. This is due to the fact that almost every order is made to order, we offer exchanges on a case by case base. Exchange request must be made within 1 week of the delivery date. Contact us before returning any items. Buyers are responsible for return shipping costs. If the item is not returned in its original condition, the buyer is responsible for any loss in value.

We do not offer replacement for packages lost in transit.

We do not issues refunds for in transit packages.

We do not replace stolen or un-retrieved packages marked as delivered.

We accept all major credit cards (Visa, Master Card, American Express, Discovery) transactions securely through Paypal. You will receive confirmation of your order through email.

Drop Us A Line

Thanks for contacting us. We'll get back to you as soon as possible.

This is a standard cookie notice which you can easily adapt or disable as you like in the admin. We use cookies to ensure that we give you the best experience on our website.